What Is Round Robin DNS?

Round robin DNS is nothing but a simple technique of load balancing various Internet services such as Web server, e-mail server by creating multiple DNS A records with the same name.

How Does It Works?

You configure DNS server to send a list of IP addresses of several servers with same hostname. For example, foo.dnsknowledge.com may be configured to return two IP address as follows:

You can use round robin DNS for

So a request to google.com would be split into the 3 server. When you type http://google.com/ first time in a browser, 74.125.53.100 will display google search home page. Type the following command again at the shell prompt:
host -t A google.com
Sample outputs:

Next request would go to the server 74.125.67.100. By using Round Robin DNS google managed to lighten the webserver load. This kind of setup pretty common among the large website such as google.com, amazon.com, yahoo.com etc. If your site gets a large number of hits (millions of unique hits per day) per day, consider using this technique.

How do I fix this problem under BIND 9 named server?
END_OF_DOCUMENT_TOKEN_TO_BE_REPLACED

What is Time To Live (TTL)?

Time to live (TTL) is used for computer data including DNS servers. It is nothing but time on the period of time or number of iterations or transmissions in computer and computer network technology that a unit of data (e.g. a packet) can experience before it should be discarded.
END_OF_DOCUMENT_TOKEN_TO_BE_REPLACED

What Is NXDOMAIN (Non-Existent Domain)?

A NXDOMAIN is Non-Existent Domain. It is a term used for the Internet domain name that is unable to be resolved using the DNS servers or domain name not yet registered. NXDOMAIN can also take place due to the network or DNS server problem.
END_OF_DOCUMENT_TOKEN_TO_BE_REPLACED

What Is Authoritative Name Server?

An authoritative name server provides actual answer to your DNS queries such as – mail server IP address or web site IP address (A resource record). It provides original and definitive answers to DNS queries. It does not provides just cached answers that were obtained from another name server. Therefore it only returns answers to queries about domain names that are installed in its configuration system. There are two types of Authoritative Name Servers:

How Do I View Authoritative Name Server Names and IP Address?

You can also use nslookup command under MS-Windows or UNIX like operating systems. Type the command:
nslookup
Now set query type to ns at > prompt:
> set query=ns
Now enter domain name such as google.com or dnsknowledge.com:
> dnsknowledge.com
Sample Outputs:

How Do I Register Authoritative Name Server? 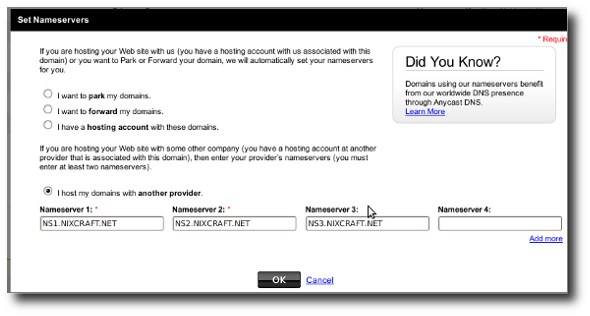 What Is TLD Name Server?

What Is Resolving Name Server?

The DNS is the default name resolution service used in UNIX (configurable option) and Windows servers.

However, when the Internet was very small, hostname resolution was done using /etc/hosts file under UNIX. The hosts file is a computer file used by an operating system to map hostnames to IP addresses. MS-Windows also support the hosts file and usaully locate at %SystemRoot%\system32\drivers\etc\ directory.

However, these days Domain Name System is the default name resolution service used in all operating systems including mobile phones such as Apple iPhone. DNS is part of the operating system and all TCP/IP network connections are, by default, configured with the IP address of at least two DNS server to perform name resolution on the network. In this tutorial, we’ll take a look at the DNS system.

DNS is used to map a domain name to an IP address. For e.g. when you type a domain such as dnsknowledge.com into your browser the client needs to find the IP address where this website is located. This is done using DNS servers. However, keep in mind that over last few years the Internet grew into the tens of thousands (there may be billions of IP address active with hostnames), a more flexible more scalable solution was required. The DNS makes is possible to manage millions of hostnames and IP address efficiently. The DNS has become the main name resolution used on the Internet today.

How does DNS works?

You can easily verify above sequence using your ISP’s dns server. If you are using UNIX or Mac OS X, open the terminal and type the following command:
dig +trace @4.2.2.1 google.com
OR
dig +trace @your-isps.dns.server.ip google.com
Sample Outputs:

The DNS is a naming system for computers, servers and other network devices over the Internet. It is used for resolving hostnames to IP addresses or vice versa. For e.g. hostname server.dnsknowledge.com has IPv4 address 67.228.49.226 and has IPv6 address 2607:f0d0:1002:11::9. In other words DNS is used for associating a domain name (such as dnsknowledge.com) to an IP address (such as 67.228.49.226). It just work like the “phone book” for the Internet by translating easy remember computer or server names into IP addresses.